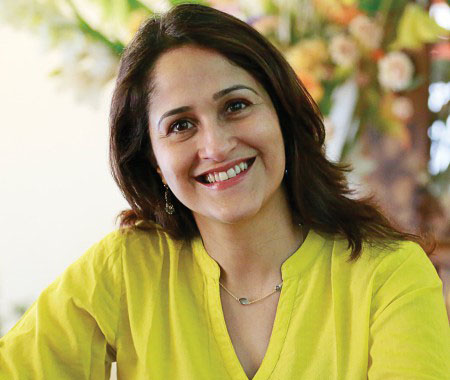 Kiran Bir Sethi is a designer who became a teacher, a principal who grew into an education reformer and subsequently morphed into a social entrepreneur. A trained visual communicator from the National Institute of Design, she comfortably uses the language of design as a tool for user cantered innovation.

Sethi founded the award winning Riverside School in Ahmedabad, India, in 2001. Riverside, is viewed as a laboratory to prototype design processes that uses a systems approach to build a culture of empowerment, graduating young citizen leaders with an ‘I CAN Mindset’ – using their agency for the greater good. The values that nourish this mindset are the 5 E’s – Empathy, Ethics, Excellence, Elevation and Evolution – intentionally moving us to becoming HumanE, by design.

Riverside Learning Centre ( RLC ) started in 2016, has codified the practices and processes of The Riverside School, and housed them in 6 Pillars (Curriculum, Parent Partnership, Personal and Professional Development, Community, Administration and Leadership ) and designed Training Programmes that empower more schools to become I CAN schools.

Kiran is also the founder of 'aProCh'—an initiative to make our cities more child friendly, for which she was awarded the Ashoka Fellow in 2008 and was a Yidan Fellow in 2019.

In 2009, Kiran launched “Design for Change” which uses a simple 4 step design framework – FIDS (Feel, Imagine, Do, Share) to cultivate the I CAN belief in all children. Today, DFC is the world's largest movement of change - of and by children, and is in 60 countries—impacting over 2.2 million children and 65,000 Teachers.

Over the years, Kiran, Riverside and Design for Change have won several accolades and Awards, and some of the most recent onesare:

Kiran currently resides in Ahmedabad with her Husband – Geet Sethi and two wonderful children – their son, Raag and daughter, Jazz. She loves listening to music, watching movies, singing, dancing and has an insane love for fruit-filled Dark Chocolates!!!


‘Outside the comfort zone, is where the magic happens’, is the motto that drives this dreamer. With a strong belief in the children’s power to become superheroes, Anjali Chhabra aspires to become a peace educationist by making education a laboratory of peace. A Journalism graduate with masters in Peace and Conflict Studies, she has done intensive field and research work in the border areas of Kashmir. Recently she graduated from Gandhi Fellowship, a two year leadership programme in Mumbai (Maharashtra) aimed at transforming the head masters of government schools to leaders of tomorrow. Her vision is to create a successfully scaled peace education curriculum based on PLAY and ultimately mainstreaming it in the state’s education policy.


Asma has spent half a decade with children inside the classroom as an educator. Spending her time inside classroom taught her to be patient, humble, curious and a believer in persistence. She has completed her Bachelors in Economics. She also has a Bachelors degree in Education. Before joining Design for Change, she was a fellow at Teach for India.


Amogh Lux is a recent graduate from Chapman University in Orange, California with a degree in public relations, advertising and fine art. He firmly believes in the power of innovation and simplicity in tailoring experiences. A self proclaimed brand enthusiast, Amogh's goal is to help spread the “I Can” attitude around the globe via social media. His plan is straightforward; to turn up conversation and keep social media social.


Pranay Desai is an integral member of Design for Change. He has 11 years of design practice behind him. He graduated from the prestigious MS University of Baroda and specialized in Visual Communication. He started ‘IINFI Design Solutions’ in 2000 with his partner, Chintan. His core competency is in the area of graphic design. He is responsible for the design and technology backend expertise and support for Design for Change.


After finishing his BE in Mechatronics from Manipal University and working with IMEC in Belgium for 6 months, Anshul joined DFC in 2011. He has since slipped into the role of Chief of (pretty much) Everything with complete ease. It’s standard practice to find Anshul looking alarmingly sleep-deprived, as it is to find his emails in your inbox at ridiculous hours. Don’t be fooled by his frequently spaced-out look; Anshul is a stickler for perfection, and demands it of everyone around him.


On the rare occasions that he is not working, you’ll find Anshul in some remote corner of the country exploring his interest in folklore and storytelling or making an earnest, yet unsuccessful attempt at growing a respectable ponytail. The ponytail aside, we don’t know what we would’ve done at DFC without Anshul and his remarkable ability to get things done.


Nikita Desai joined as a member of the Design For Change - Global team in 2017. She has been with Riverside School for the past 20 years as a parent, an educator, Head of Riverside Learning Center and as a School Leader for Key Stage 2. (Grades 3 to 7) The fundamental philosophy that drives Nikita’s impeccable work ethic of hard work, dedication and user-centered design is, knowing that with adequate opportunities and support, every child can do anything and everything. Attuned to the Design for Change motto of ‘I Can’, she aspires to help all her students become aware of what bothers them and then to empower them to shift focus from vision to action. Nikita’s understanding of the pedagogy has been strengthened through training in Multiple Intelligence, Differentiated Instruction as well as an online course by the Harvard Graduate School of Education - ‘Teaching for Understanding’. She was invited to present Riverside’s philosophy by the Royal Education Council of Bhutan, Day Star School, Beijing, and Design Thinking at the Teach For All conference in London. She has also co-facilitated a workshop with Kiran Sethi at the Lego conference in Billund. She has been to schools in Rajkot, Anand, Sangamner, and Chittoor as an auditor for their pedagogy and practice. She has been the core team member in organizing the I CAN Children's Global Summit in Rome, where 2000 children from around 40 countries had a personal audience with Pope. Nikita enjoys interacting with people and meeting new minds, photography, listening to music, traveling, and trying different types of food.


Not only has she seen the beginning of DFC, Parul has been around since the founding of the Riverside School itself, way back in 2001. A graduate of B.Com, Parul uses her administrative super powers to ensure the smooth functioning of DFC as well as Riverside. With her knack for building enduring relationships over phone, email, or in person, Parul is the point of contact for all our India partners and an indispensible asset for the team!


When she is not walking around campus interacting with students and teachers, you will find Parul perched on her favourite chair, which offers her the perfect vantage point to keep one eye on everything that’s happening while doing her work.


Ruchi Junakar is a graduate from Sophia College, Mumbai and holds a Bachelor’s Degree in Mass Media with a major in Journalism. She joined Design for Change in February 2013 and is the main Coordinator for DFC’s annual Be The Change Conference, as well as the overall operations of DFC. Her persistent hard work and genial nature makes her a valuable teammate.


Nilufer Siganporia is an Administrator & an Examinations Officer for Key Stage 3 at The Riverside School. She is a Commerce Graduate, and has a Diploma in Secretarial Practice. She is essentially a PR/HR person, and the first face of Riverside!! This makes her the perfect Coordinator for Hospitality, Guests and Communication for Design for Change. Her inherent love for children has made her a popular ‘Agony Aunt’ for everyone at Riverside. She is ‘high on life’, and strongly believes that ‘God has a plan for our life, and that’s all we need to know’.


At Design for Change, Akanksha is trying to bridge the theory and practice of school improvement and learning through Design Thinking. She was a Gandhi Fellow and has worked with Bombay Municipal School Headmasters on designing more engaging learning environments in public schools. She dreams of designing a relevant and inclusive public education system. She has studied literature from Miranda House, Delhi University and has a Masters in Development Studies from TISS, Mumbai.

Over the years, Kiran, Riverside and Design for Change have won several accolades and Awards, and some of them are:

In 2015, Kiran was amongst the Top 10 Educators, nominated for the Global Teacher Prize - instituted by the Varkey GEMS Foundation.

In 2015, Kiran was conferred the Asia Game Changer 2015 Award by Asia Society.

In 2017, Kiran met the Pope in the Vatican to sign an Agreement whereby DFC is being introduced in over 460,000 Catholic Schools across the Globe.

In 2017, DFC has been recognised as one of the 100 most innovative educational programmes in the world by HundRED.org (based in Finland).

In 2018, Kiran has been awarded the “Light of Freedom” Award, at the Vital Voices, U.S.A., Global Leadership Awards.


After graduating from the National Institute of Design, Ahmedabad (India) in 1989, Kiran successfully ran her own Graphic Design Firm for over a decade. She moved into Education when she founded The Riverside School in Ahmedabad, India in 2001, which is now viewed as a Laboratory to prototype “design processes” that enables “transformative” student learning experiences.


Kiran is also the founder of 'aProCh'—an initiative to make our cities more child friendly, for which she was awarded the Ashoka Fellow in 2008. In 2009, she received the "Call to Conscience Award" by the King Centre at Stanford.


In 2009, Kiran launched ‘Design for Change’ which uses a simple 4 step design framework – FIDS (Feel, Imagine, Do, Share) to cultivate the I CAN Mind-set in all children. Today, DFC is the world's largest movement of change - of and by children, and is in 60+ countries—impacting over 2.2 million children and 65,000 Teachers.


Kiran currently resides in Ahmedabad with her Husband – Geet Sethi and two wonderful children – their son, Raag and daughter, Jazz. She loves listening to music, watching movies, singing, dancing and has an insane love for fruit-filled Dark Chocolates!!!


The latest entrant to the D.F.C. Team - Nivedita Menon - is a socio-cultural anthropologist from the State University of New York, Buffalo, U.S.A. She believes there is no end to learning and that we learn something new everyday from every person we meet. Experiences from her nomadic journey always have and continue to amaze, teach and inspire her - both in terms of work in the field of social development and human rights and life in general. She strongly believes that the power of music and the role that education plays can change lives and build a culture of peace. Also one motto (among many others) she does her best to follow : Eat .. Travel .. Love!!


Rahul is currently working as a management consultant in a firm specialized in strategy consulting. In his 15+ years of experience, Rahul has worked on various domains including technology, retail, airlines, insurance and manufacturing. Besides strategy formation, Rahul specialises in creating customer centric solutions, sales process optimization, organizational operational efficiency and process improvement, and business development .